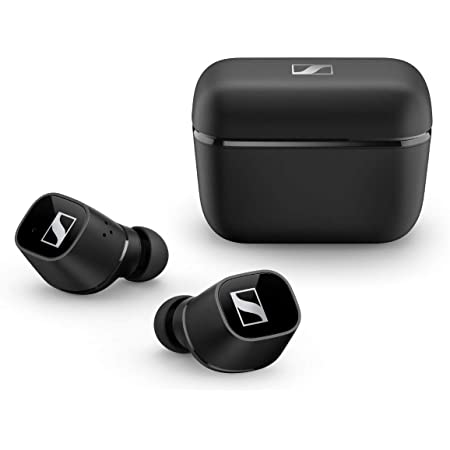 TLDR: Sounded like shit out of the box, but you can EQ them to something really lovely if you can get the Sennheiser app to connect to them. At £99 they are a proper bargain. If you want a relaxed, warm, easy-going sound with the flexibility of bluetooth they’re a no-brainer.

I have been looking for a set of wireless, bluetooth in-ear headphones for a while. Nothing really jumped out until I saw the Sennheiser CX400 BT True Wireless online.

I was actually looking to buy the Sennheiser MOMENTUM True Wireless 2 but the cost of £239.00 (at the time of writing) was a bit more than I was prepared to spend.

I went with the £99.00 CX400BT because they have the same driver unit and enclosure geometry as the way more expensive MOMENTUM earphones. The main differences between the two products being noise cancellation and a slightly better battery life (20h vs 28h). You can even connect the CX400BT to the Sennheiser app on your iPhone or Android device.

None of the additional features were something I required, I was solely focused on sound and bluetooth wireless connectivity.

I’ve had nothing but trouble from past Sennheiser wireless bluetooth products in the past. I have a dead pair of “CX 6.00BT” that refuse to power on and a dead pair of original “MOMENTUM Free Wireless” that just refuse to charge. They both died just outside the warranty period, which sucked. The “MOMENTUM Free Wireless” retail at £169.00 which is a kick in the balls.

I have a lot of love for Sennheiser and am willing to forgive them the odd crappy product. I adore my IE800, my HD650 and loved my IE80 before I trapped them in a car door.

Back to the CX400BT; I felt they were a steal for £99 compared to their more featureful bigger brother so I took a risk and grabbed a pair.

The packaging was fairly standard CX-like packaging. A box, some paper leaflet crap and the headphones. They sit in their little USB-C charging case looking all cute. The case seems robust, and there’s really nothing of note about that.

The actual earphones themselves seem well constructed. Obviously you don’t get all the fancy materials of the higher-end version but … who cares when they sit inside your ears?

If you remove one of the standard Sennheiser supplied rubber tips, there’s a little bit of foam stuffed in the end. This looks weird, like it might fall out.

The magnets that snap the earphones into the charging case hold firm, and they take no time to charge. I can’t tell if they power down when inside the case, but I hope they do to avoid constant battery cycling.

Take them out, pop them in, press them both for 3-seconds and pair to your phone or device. Simple … not quite. It took me multiple attempts to pair them to any device. The English accent of the in-ear message saying “Pairing failed” was becomming annoying.

Eventually after a dance of popping them in and out of the case (hoping this power cycled them) and restarting my various devices; they paired.

I popped some music on. URGH. These things sounded absolutely horrid. Clearly the Sennheiser market research team determined listeners wanted ALL THE BASS and delivered the most severely fucked frequency response i’ve ever heard. More on that later.

I decided to install the Sennheiser app next on my Android phone. Getting the app to recognise and mate with the device was a chore! Again, various iterations, app closures and power cycling got the job done but it was clunky.

Then I paired them with my TV which went well, and seemed to work well despite missing the low latency features in the bluetooth stack of the earphones. I also got them to pair (after some trauma) with my Linux laptop and redirect the sound to them and recognise the microphone.

I have really average ears. My earholes are average size and the surrounding outer-ear bits are just … average and normal. This means I get on really well with fit.

I’ve never struggled with fit of any in-ears. I don’t even change the tips that come on them from the factory, because the average ones work best for me. Take my fit opinion with a big old pinch of salt.

The big boxy shape doesn’t look like it should work … but it does. Sadly, this probably isn’t the case for everyone. If you have small ears, good luck seating the box in your ear-shell. If your ear holes are in a weird position, you won’t get a seal. If your ears are not deep enough, they’ll fall out.

If you have average ear dimensions, they’ll work great and you can wear them all day long.

Sharing the same 7mm custom driver with the nearly three times more expensive MOMENTUM model, I was expecting to hear something good. I did not … not right away anyway.

Out of the box they are muddy, boomy, muffled and horrific. Listening to them for around 10 minutes I noticed they had really clear instrument separation and a pretty decent soundstage. There was also a nice amount of detail in the highs. I can’t explain it, the driver sounded capable but something wasn’t right.

I cracked out the Sennheiser app on my phone and started messing around with the EQ. The EQ told me the current, default setting was “Neutral” … no. There was absolutely nothing neutral about whatever horseshit this was.

I changed a few settings in the 3-bar (bass, mids, treble) EQ. Knocked the bass down 1 notch, the mids up 1 notch and the treble up 2 notches.

The sound this produced reminded me of my old IE80. There’s clearly a lot of firmware between the driver and the source, and I don’t think there’s a way to “turn the EQ off” and just hear the driver … but I feel like this gets close somehow. Probably not though. I’d like to work out what the app is sending to the earphones and see if there’s any hackery to be done.

Once I had the EQ setup, they’re really fun and enjoyable. Very warm and laid back, open sounding and … for the price … fairly detailed. I was impressed with the instrument separation and soundstage. They’re the type of sound that you can relax with all day. That’s exactly what I wanted.

If i’m working, pottering around or not doing “serious listening”, my IE800 can be a little bit stark and attention grabbing.

These fit into a space, with a very familiar Sennheiser sound, where I just wanna sit on the sofa and watch YouTube videos without a cable. Where I just want to do some chores or move about without cables. They’re for when I want music without it being the focus of what i’m doing. For that, they’re perfect.