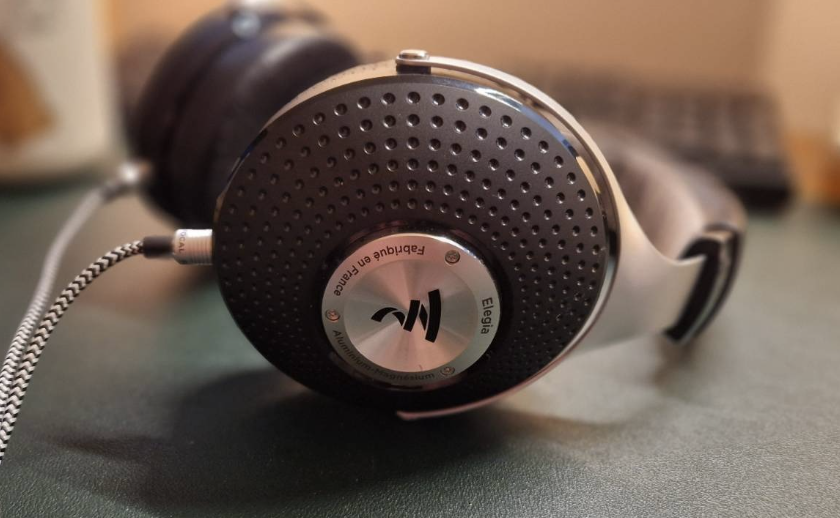 Removing 4 of the 6 screws under the pads and loosening the clamping pressure on the speaker inside improved a range of issues I had with the Focal Elegia (some of my own making) and created a headphone I actually like listening to, where I’ve not before. I’d go beyond that and say, they’re bloody good now.

I may create a follow up post, with a more reproducable modification to the Focal Elegia, but for now I don’t want to mess with a good thing.

I’ve never really “got on” with the Focal Elegia. I grabbed my pair at a discount second hand (from a reputable source, not a broken eBay special), because I was so in love with my OG Clears.

To me, the Elegia always sounded “off”. Their mids swampy and recessed. The imaging was all over the place, the bass always felt too dark, thick and washy.

One day I my Elegia got a bit … grim … because I used them for a workout and they got super sweaty. I decided to take them apart and see if any moisture was inside.

Inside each channel’s cup was a speaker that just “came out” when the outer plastic was removed via 6 small screws. The speaker unit was held in place by the pressure of the plastic casing from the outside-in when secured with screws.

There’s two contact pads on the underside of the speaker assembly that “press down” onto some sprung contact pins in the plastic enclosure. Once the 6 screws are out, you can just lift the complete speaker assembly out of the cup.

I cleaned off the diaphragm with some isopropyl alcohol, ensured everything was dry, and re-assembled. Thankfully the sweaty humidity didn’t cause any damage. This isn’t a shock, as the speaker is a sealed self-contained unit, and there’s not much opportunity for moisture ingress.

What I did notice after reassembly however was the left channel had basically nil frequency response below 65Hz. I couldn’t think of a reason for this. I took them apart again, cleaned again, and put them together. The problem went away. All was well.

The Elegia sat unused for about a year after this. The next time I came to use them the 65Hz issue had come back, but in the right channel.

Again, I took them apart, gave them a clean and put them back together.

Listening to them this time, something weird happened. There was mid-range distortion, the sound was terrible … each ear had a different problem. One ear had 65Hz and below missing, the other sounded like a baked-bean tin.

I took them apart, ensured everything was seated right; but this time I only put 2 of the 6 screws back in each speaker unit. THEY SOUNDED AMAZING.

I took out the 4 screws and they went back to sounding AMAZING. Better than when I got them.

After a bit of trial and error, it appears the screws have a massive impact on the sound … because their tightness directly relates to how firmly the speaker unit is held in place in various places. I don’t have the torque settings for the screws, but I couldn’t find a combination that sounded better than the “two screws” solution.

Each of the two screws was tightened until the slightest resistance was felt … then stop. Just enough to contact the speaker terminals to the pins.

I think they sound better. Much better. Most of my complaints about the Elegia were remedied. The mids were not as recessed, the bass wasn’t as swampy and bloaty, the imaging was much better and they sounded much more “open” and balanced. Even the sound stage is wider and placement and separation is improved.

My working theory is that because the speaker is held in place via pressure of the case, this can impact the sound in a big way. Tighten the case down too much, and you ruin the sound, damping everything below 65Hz or so. If some screws are too tight and others too loose, you get distortion and odd sound changes. It seems obvious that a uniform pressure on the driver is required for optimal performance, but the “2 screw” strategy seems to put just the “right” pressure on the driver, in the right way.

This is very similar to a drum skin. If you don’t tighten the lugs down on the drum hoop, there’s uneven tension on the skin and weird overtones, resonances and general tone corruption can happen.

I have no idea how accurately these screws are tightened from the factory, or if they can back-out with time. I just know, for now, this works. I’m going to experiment further and see if there’s a more scientific mod that involves speaker pressure and seal.

Disclaimer: I didn’t get my Elegia new, and though I have no reason to suspect they were opened previously, they may have been. If they were, they may have been reassembled with over or under torqued screws which meant they never sounded good anyway and i’m just undoing that situation.